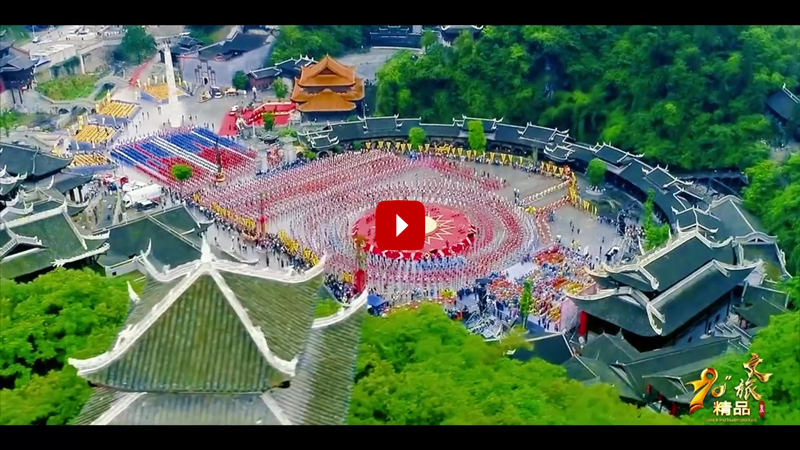 Pengshui is located in the southeast of Chongqing, at the hinterland of the Wuling Mountain region, and downstream of Wujiang River. Since it was founded as a county in the Han Dynasty, over 2,000 years ago, it has been governed as dao (circuit), zhou (country subdivision), and county. Pengshui is the home to China’s traditional folk arts and poems. Huang Tingjian, a great poet and calligrapher, has left a lot of treasured scrolls of calligraphy and paintings and poems here.

Pengshui is the only minority autonomous county in Chongqing, gathering most Miao People around China, and it also boasts Chiyou Jiuli City, China’s most significant traditional architectural complex of Miao People. The county also has a beautiful natural environment, decorated by splendid and steep gorges, karst caves in various forms and appearances, and picturesque mountains and rivers.

Miao People are good at singing and dancing. In Pengshui, the Miao People have learned dancing since an early time and live in Miao village, follow Miao etiquette, practice Miao customs, and sing Miao songs. Over several years of exploration, sorting, extraction, and choreography, Pengshui has developed a featured dance called “Caihuashan” for entertainment and fitness. Every year, on the eighth day of the fourth lunar month, Pengshui Miao people are accustomed to wearing traditional dresses to celebrate the Caihuashan Festival, when they will sing in an antiphonal style, dance, perform the lion dance, practice crossbow, kick shuttlecock, and climb along a long pole for competing. 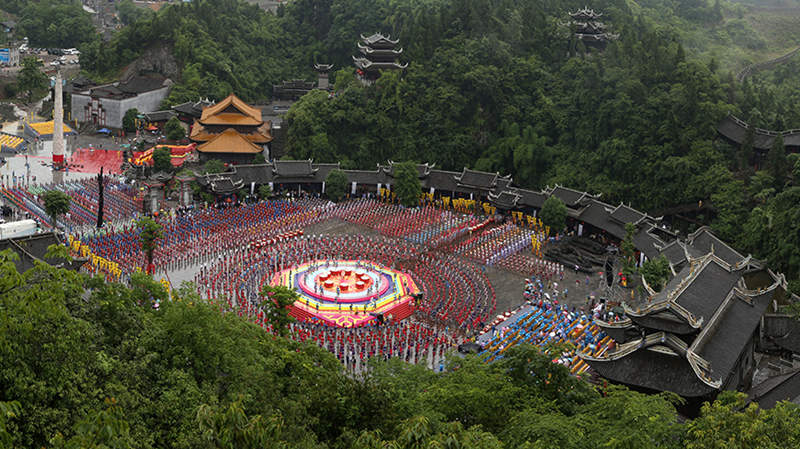 Pengshui is the only minority autonomous county in Chongqing, gathering most Miao People around China.

The Caihuashan Festival of Miao Nationality in Wujiang River has been held for eight consecutive years, becoming an essential part of Pengshui’s “One Festival and One Competition” events and the county’s name card of gorgeous culture. In recent years, Pengshui has been striving to explore and sort out its national dance by holding various dance competitions, thus facilitating the development and inheritance of music and dance of minority and boosting the tourism for folk customs in its local region.

Chiyou Jiuli City, with profound and rich cultural deposits, is a window and base for Pengshui to present and inherit the culture of Miao People. This scenic site has combined the architecture, culture, tourism attraction, and visitor reception of Miao People, and it will inherit and continue the history, culture, and folk customs of this minority. 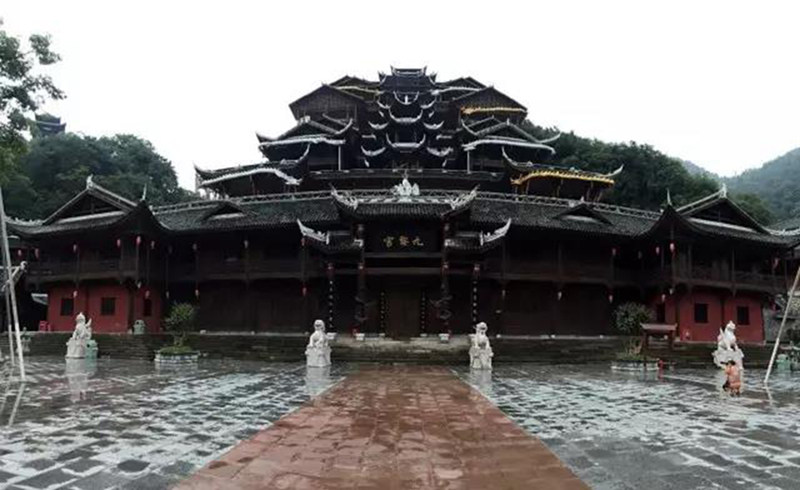 Chiyou Jiuli City, with profound and rich cultural deposits, is a window for Pengshui to present and inherit the culture of Miao People.

Chiyou Jiuli City has nine Chao Gates (the gate in the palace which leads into the room where the emperor holds his official audiences), which is the only among the world’s architectures. Besides, Jiuli Blessed Pillar is the world’s tallest and biggest one of its kind with the most number of figure totems of Miao People, and Jiuli Palace is the highest and largest quadrangle courtyard and stilted building complex on this planet.

Mowei Mountain is a national 4A tourist attraction, known as an oxygen bar in the air for its average altitude of 1,500 meters. Mowei Mountain is an emerging health resort in Chongqing, positioned as China’s national forest park and national forest health base. It unfolds different beautiful pictures in every season, and the forest coverage rate of 91% and the annual average temperature of 14.9 °C also make it a summer resort. 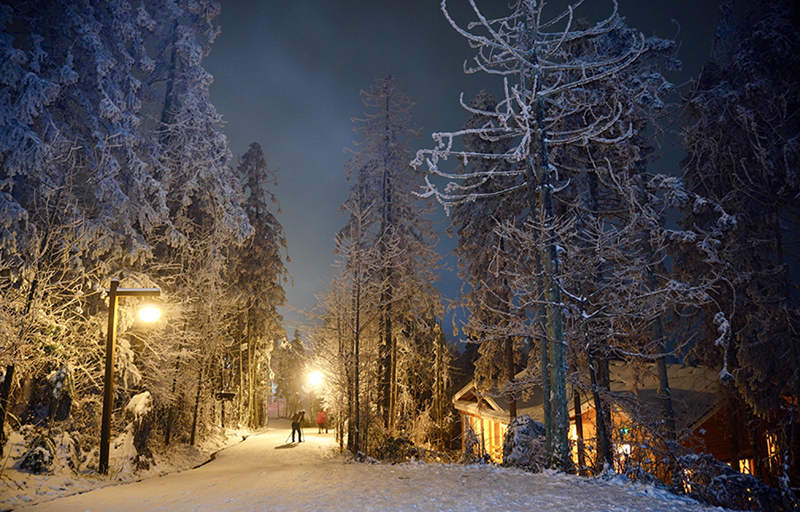 Mowei Mountain is an emerging health resort in Chongqing.

The well-built and opened sites include the alpine meadow, training and camping base, etc., satisfying requirements for tourism, sightseeing, commercial conference, study, painting, and summer camp.

Ayi River is also a national 4A tourist attraction, ideally combining mountains, streams, forests, springs, and canyons to show a picture with splendid, impressive, dangerous, pretty, and secluded sceneries. The river, flowing quietly, is charming, and you will feel like being in a beautiful fairyland while boating. Ayi River is known as one of the twelve sceneries in today’s Bayu region.

Ayi River Skywalk is the highest outdoor sightseeing elevator in Asia and a must-visit site for tourists seeking a breathtaking experience. The Bashan Gallery Pavilion is built along the rock and with mountain stones as the basis and wood as pillars, giving an excellent example of the perfect and harmonious combination of humanity and nature. Qinglong Cave showcases a variety of chemical deposits so that it is also known as an “underground geological museum.”

The Wujiang River Gallery, another national 4A tourist attraction, is located between Wujiang Pengshui Hydropower Station Dam and Youyang Ancient Gongtan, stretching 34 kilometers. It has gathered the most fantastic sceneries of Wujiang River, featuring precipices, dense forests, and rushing water. 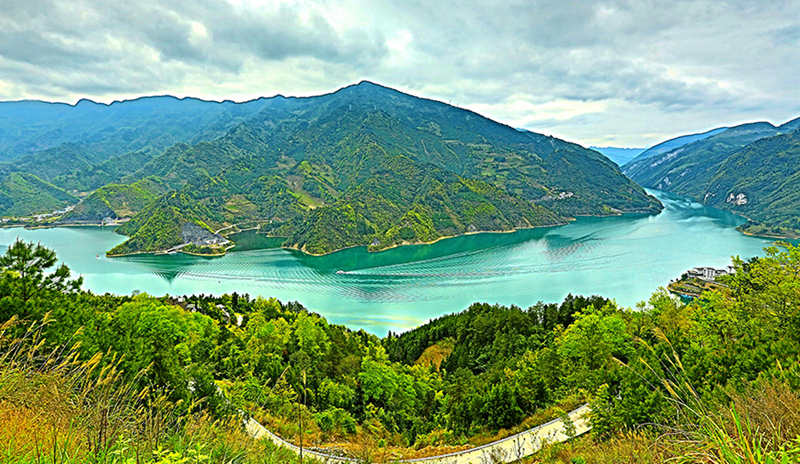