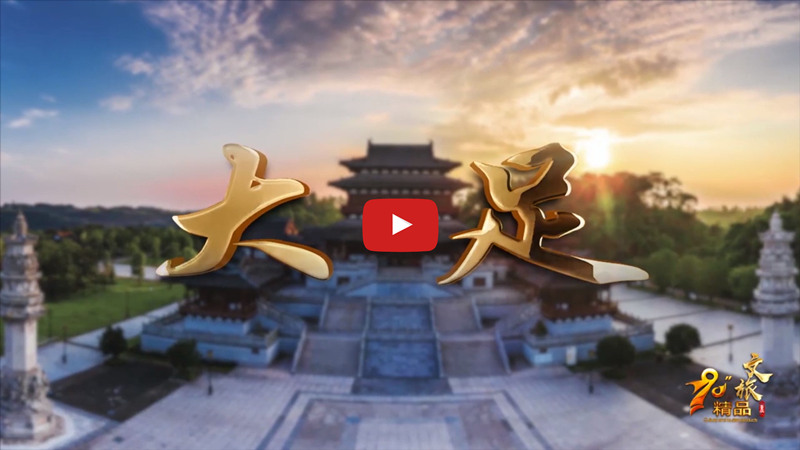 Dazu was founded in the first year of the Qianyuan Reign of the Tang Dynasty as the seat of the ancient Changzhou Prefecture. It was named from the Dazuchuan river, which means “good harvest and abundance” literally in Mandarin.

Dazu has been reputed for its being the Hometown of Stone-carving, the Production Base of Hardware, the Kingdom of Chinese Flowering Crabapple, as well as the scenic cultural charming area and the rural tourist destination.

On Dec. 1, 1999, Guo Xiangying, the native of Dazu attended the 23th session of the World Heritage Committee of UNESCO held at Marrakech, Morocco, at which he introduced Dazu’s art of stone carving to the world. 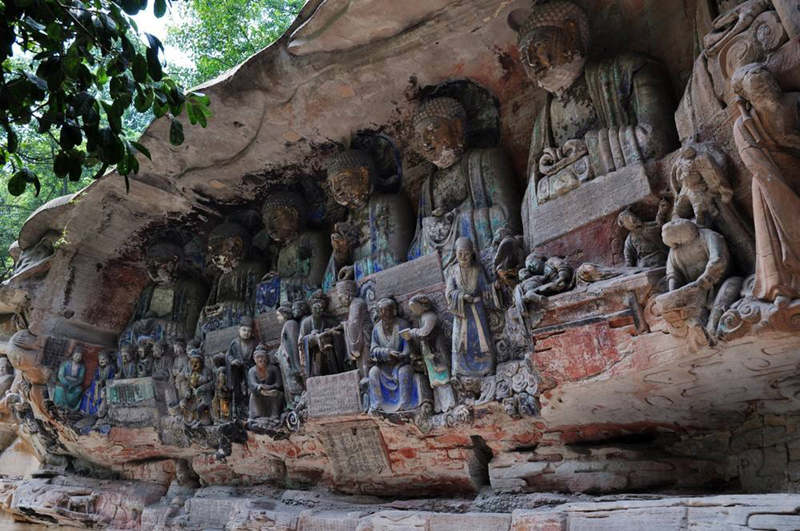 The Dazu rock carving has a thousand or so years been covered up in the vast wild land and grass.

As the world cultural heritage and the important part of Dazu Stone Carving, Baodingshan Stone Carving refers to the groups of stone statues in caves which were created at Baodingshan Mountain by Zhao Zhifeng, a Dazu monk in the Southern Song Dynasty (1127-1279). Within the area of Dazu there are a total of more than 50,000 stone statues, the highest of which is as high as 20 meters. The stone statues at Dafo Bay on Baodingshan Mountain are of a large scale, and the whole bay looks like a grand and imposing picture scroll depicting the folks’ customs and life in the Song Dynasty (960-1279); therefore, Dazu Stone Carving has been acclaimed as the last milestone in the arts of grottoes in China.

However, Dazu Stone Carving has a thousand or so years been covered up in the vast wild land and grass. In 1974, the 38-year-old Guo Xiangying was transferred to work with the original Dazu County Cultural Relic Station. He has always been fascinated with painting, thus was immediately attracted by these exquisite ancient statues, and threw himself into the work of painting Buddhist statues in these caves one after another.

Within ten years, Guo Xiangying had completed a 20-plus-meter long picture scroll, which includes all important grotto statues at Baodingshan Mountain and Beishan Mountain at Dazu.

Dazu Longshui has been regarded as the important production base of hardware in China, the history of which started from the late Tang Dynasty (875-907). Wei Junjing, governor of Changzhou Prefecture, gathered a batch of artisans in coal mining and iron ware nearby to product such cold weapons as dagger-axes, spears, knives and arrows in a large scale at Longshui Town.

By the end of 1258, the troops from the Song Dynasty and the Mongolia fought a hard battle for as long as 36 years. The blacksmiths Dazu, the then rear area, kept busying in producing bows and crossbows, swords and spears; especially, they had developed a kind of metal arrows, long and thick, to deal with the amour of the Mongolian soldiers, thus rendering strong support for the soldiers and civilians of on the side of the Song. 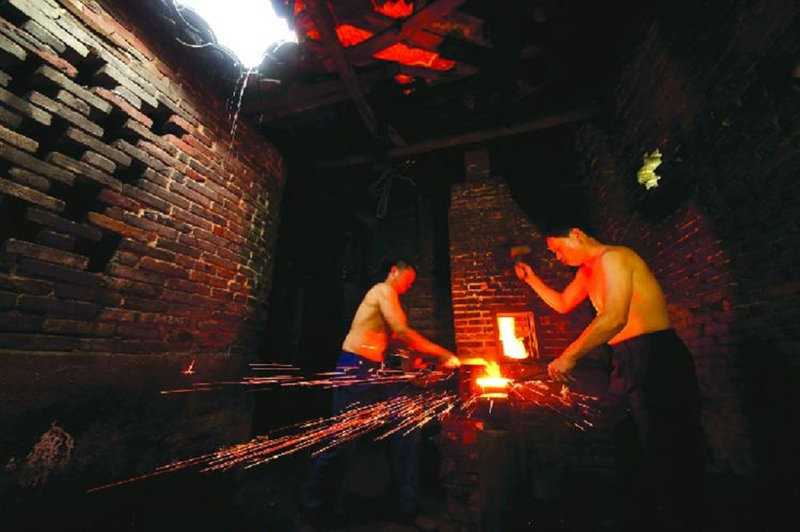 Over the past 1,100 years, Dazu hardware earned and consolidated its reputation after witnessing numerous wars of blood and fire.

Why has Dazu hardware kept prospering over the past millennium? According to Deng Xiujian, representative inheritor of Longshui Hardware Forging Techniques, the city-level intangible heritage, it is attributed to the heritage from generation to generation, and the artisans’ efforts of improving their techniques and the quality of products.

As the saying of “severe training and hammering” goes, the forging techniques play the important role—heat the iron piece to 1,000℃ or higher, and then the artisan repeatedly forges it so as to increase its hardness and tenacity. Several decades ago, the Ning’an knife which was produced at Longshui could pierce through 200 overlapped copper coins; moreover, its edge would not be bent after piercing a dozen of copper coins continuously.

With the scientific and technological progress, Dazu artisans’ forging techniques have been eclipsed; however, Deng Xiujian, Deng Xiuqing and Deng Xiuju, three full brothers and the 4th generation inheritors of the Deng Family Knife, still strive to maintain and uphold the techniques.

Actually, Deng Family Knife has adhered to the tradition, but goes beyond the tradition. Ten years ago, Deng Xiujian changed the manual coarse grinding to the processing by machines. In such way has he combined the millennium-old tradition forging techniques with the modern grinding equipment, thus increasing the production efficiency by ten times or more. He further upgraded the manual surface grinding of cutter blanks to the mechanical grinding. Thus solving the problem in the traditional processing of them: unevenly thickness, and obtaining the invention patent of the State.

Blossoming lotus in the universe

About 100 seeds of 12 lotus species of 150 grams were carried by the 21st returnable scientific and technological test satellite of China into the space at the Jiuquan Satellite Launch Center at 3.30 p.m., Aug. 2, 2005.

The owner of these seeds is Luo Dengqiang, a farmer in Cihang Village, Baoding Town, Dazu District. Luo, aged 66, started the Lotus Villa as early as 1997. 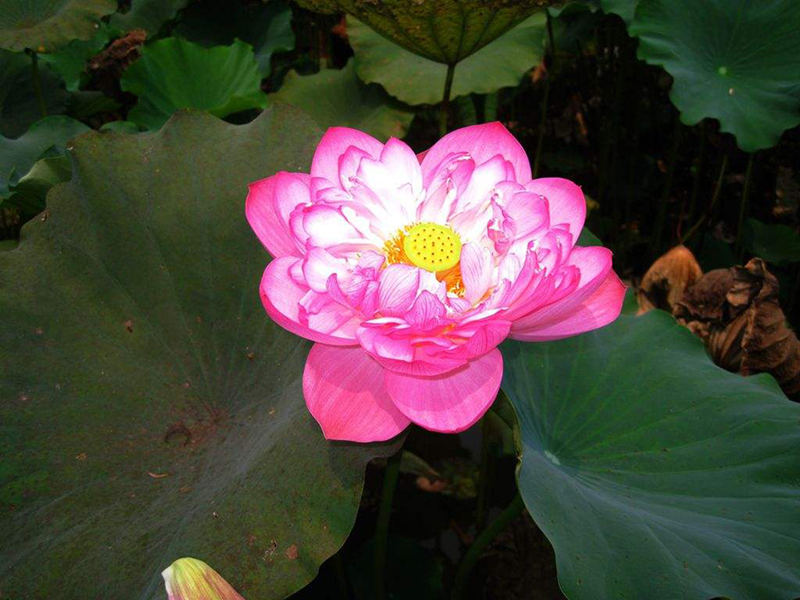 The lotus seeds coming back from the space show the tenacious vitality and obvious variation characteristics.

“After 2000, the original lotus species began their degradation, and the seasonality was too strong, thus resulting in the scarcity of tourists in autumn and winter.” Luo Dengqiang recalled. In 2003, learning that space breeding can greatly improve the quality of seed, and cultivate a new variety of lotus, which will blossom all the year round. Luo Dengqiang decided to try the space breeding.

Luo Dengqiang spent about 4 million yuan in the launch of 3,000 lotus seed of 300 varieties into space in five years.

Lotus seed coming back from the space shows the tenacious vitality and obvious variation characteristics. The first batch of space seed germinate four days after sowing, three days shorter than that of ordinary ones. Among them, Dasajin Lotus grows nine colors, while the conventional lotus seed can grow five colors at most.

Luo Dengqiang’s personal investment in space breeding had made a resonance in the whole country, stimulated the development of the lotus industry, and greatly promoted the Lotus Villa and its surrounding rural tourism facilities.