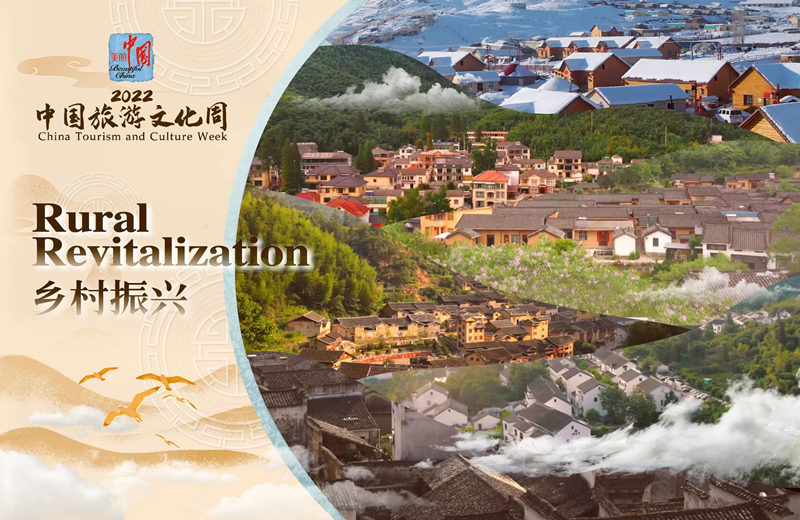 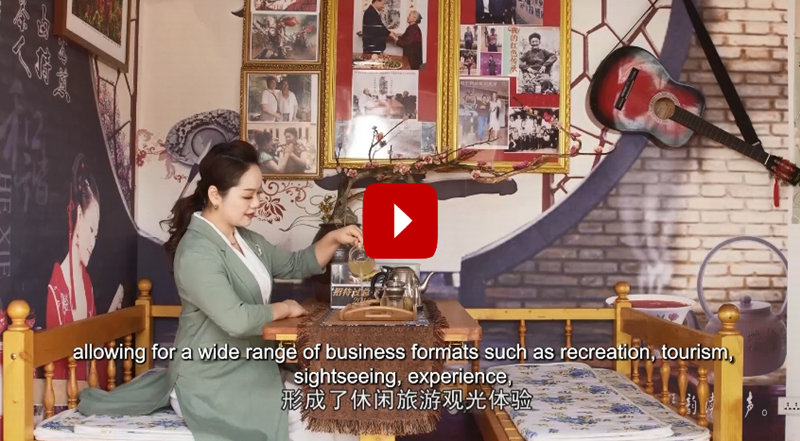 In the heart of the Dabie Mountains, Tianpu Dawan is located in the southeast of Xinxian County, Xinyang, Henan. It is a national AAA tourist attraction, a national key rural tourism village, and a provincial pilot beautiful village. Recently people here have preserved the historical features of the village to the greatest extent, relying on the development orientation of "tourism development throughout Tianpu Dawan" and insisting on no digging of mountains, filling of ponds and lumbering. In accordance with the idea of "a theme for one courtyard, a culture for one house, and a feature for one shop", people here have revitalized idle dwellings and old villages and inherited excellent farming heritage, so as to build the beautiful scenery of mountains and waters. Now Tianpu Dawan has become a popular attraction spot from an obscure little mountain village.

A Glimpse of Yucun Village

Yucun Village, at the northern foot of Tianmu Mountain, is located to the west of the government of Tianhuangping Town, Anji County, Huzhou, Zhejiang, China, and named after the remnants of Tianmu Mountain which serve as its back areas. Here, we can see a thousand-year-old ancient Longqing Temple built in the early Five Dynasties, a thousand-year-old tree known as the "King of Ginkgo in the Regions South of the Yangtze River", and a hundred-year-old Chinese giant salamander known as a "living fossil". Yucun Village has closed the mines in the past decade to restore the ecology and vigorously develop rural tourism. There is green and clean water in the Longtan Spring to the west of the mine site. The rural greenways and bamboo trails are traversed at the foot of lush hills. The villagers here have successfully transformed ecological resources into economic development, achieving both ecological conservation and improvement of people’s livelihood.

Yucun Village, located in Anji County, Huzhou, Zhejiang, is the birthplace of General Secretary Xi Jinping's concept that “lucid waters and lush mountains are invaluable assets". It boasts obvious geographical advantages and abundant business resources. In 2021, Anji County put into practice the demonstration of future village creation of Yucun Village, and promoted the comprehensive construction of public facilities, convenience services, smart platforms and other scenarios, focusing on the goal of "adhering to the leadership of party building, taking ‘people-oriented, ecological and digital’ as the value orientation, and harmonious co-governance, green intensification and wisdom sharing as the basic connotations, in order to build nine major scenarios of neighborhood, education, health, entrepreneurship, construction, transportation, low-carbon, service and governance and create a new urban functional unit with a sense of belonging, comfort and future", in accordance with the deployment requirements of Zhejiang Province on future village creation. In 2022, Yucun Village is included in the second batch of pilot villages for future rural construction in Zhejiang. As a pathfinder of green and low-carbon development, Yucun Village advances the major mission of building a green model of common prosperity, empowers green development with green experience, and is committed to creating a future village that attracts a large quantity of tourists. 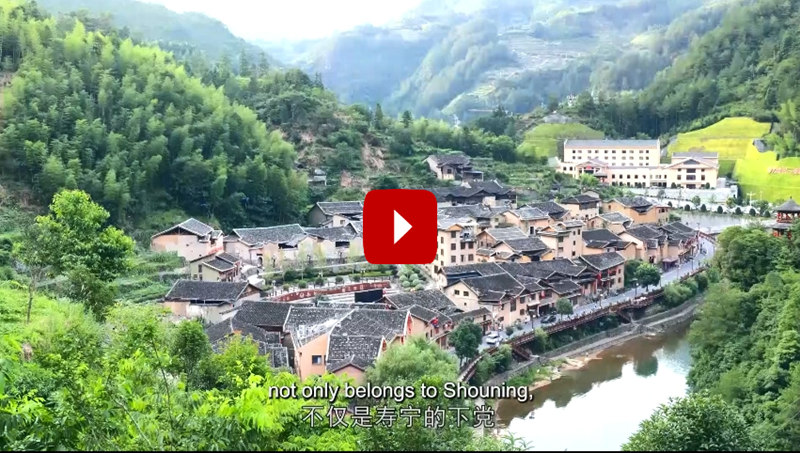 Xiadang Town is located in the west of Shouning County, Ningde, Fujian, China. It is full of vitality with towering mountains, lush trees, ancient bridges and flowing water as well as an endless stream of tourists. The most famous is the Luanfeng Bridge, which was built in the Qing Dynasty and is the most spectacular one among all wooden arch bridges in Shouning County. General Secretary Xi Jinping came to Xiadang Town three times to guide its development, practice targeted poverty alleviation, and clarify the new idea for its rural revitalization. With the focus on the idea of “building a dominant product or industry for a village”, dozens of agricultural industry and tourism development projects were planned and implemented, in order to gradually create "the rural features" with "the strength of Xiadang Town" and the tourism brand of "Fresh Fujian Province and Unforgettable Xiadang Town".

This is Shushan Village

Shushan Village is located in the west of Tong'an Town, Huqiu District, Suzhou, Jiangsu, and surrounded by clear waters and lush Yangshan Mountain and Jilong Mountain. The farmland of more than 1,050 mu has become a sightseeing orchard of high-tech “Cuiguan” pears. There is also more than 4,700 mu of mountainous area, including more than 2,000 mu, 800 mu and 300 mu for waxberry, tea trees and bamboo shoots, respectively. Therefore, Shushan Village is also famous for tea, bayberry and “Cuiguan” pears in China. In addition, there are also profound historical and cultural heritage, numerous cultural relics and historic sites, especially the strange peaks, rocks and caves as well as stone carvings of Dashi Mountain. It is undoubtedly a beautiful and natural scenic spot! 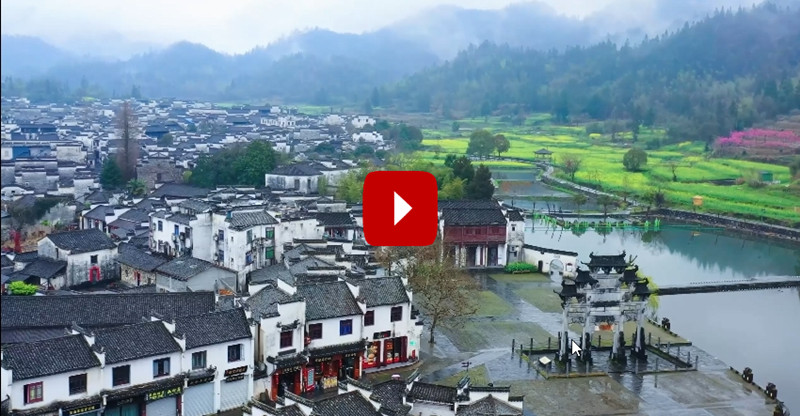 The Tourism of Xidi Village

Xidi Village, a typical ancient Huizhou village, is located in Yixian County, Huangshan City, Anhui. It is one of the main birthplaces of ancient Huizhou culture and a living specimen of Confucian merchant culture of ancient Huizhou. Surrounded by mountains and waters, it boasts pleasant scenery and exquisitely scattered houses and farmlands and is just like a tranquil and peaceful paradise. In 2021, Xidi Village was selected as one of the first “Best Tourist Villages” by the World Tourism Organization (UNWTO). As a world heritage site, a National AAAAA Scenic Spot in China and one of the Best Tourist Villages in the world, it has actively and vigorously developed rural tourism and collective economy, improved rural infrastructure, and cultivated and promoted village culture, so that local people here can fully enjoy the achievements of rural revitalization. 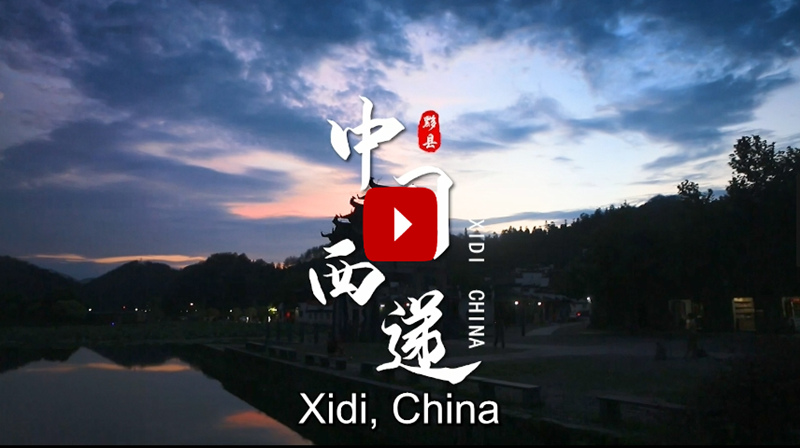 Located in Yi County, Anhui Province, Xidi Village was originally built in the Northern Song dynasty, and flourished in the early Qing dynasty after the development in the middle Ming dynasty. It is a typical ancient Huizhou village and one of the main birthplaces of Huizhou culture. The village street system is mainly built eastward and extended from north to south, with a vertical street and two roads along the stream as the trunk lines. All streets and alleys are paved with bluestone which was from Yi County. Most of the ancient buildings are renovated with wooden structures and brick walls, and the woods, stones and brick carvings vary. The alleys and buildings are coordinated in the design and layout. The village space changes flexibly and the architectural style is simple and elegant, which is typical in architectural art of ancient Huizhou in China. With a profound cultural connotation, Xidi Village is well-known for its two national intangible cultural heritages, that is, wood, stone and brick carvings and traditional dwelling building techniques of ancient Huizhou. 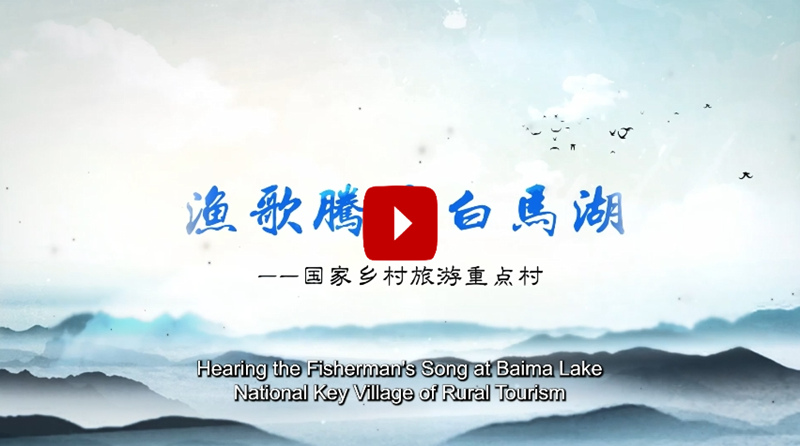 Baimahu Village, located in Jinhu County, Huai'an, Jiangsu, abounds in special aquatic products such as crabs, soft-shelled turtles and green shrimps in more than 30,000 mu of water area. It is well-known as the “Pearl on the Water” for tens of thousands of tons of green ecological food. Here tourists can be intoxicated with a perfect combination of water culture and lake and island scenery. With the help of water resources, tourism resources and lake culture in the village, now local people have achieved rural revitalization in the thriving industry of innovative models such as “ecological food + tourism”, “folk customs + tourism”, and “e-commerce + tourism”, enabling their own wealth and strength through tourism. 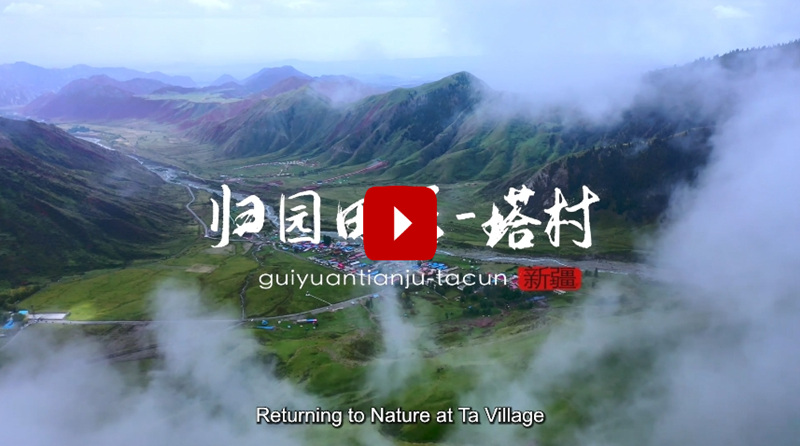 Returning to Nature at Ta Village

Taglak Village, at the foot of Tomur Peak of the Tianshan Mountains, is located in Kekeya Town, Wensu County, Aksu Prefecture, Xinjiang Uygur Autonomous Region, China. The lush mountains and the lucid waters contrast with each other, and various scenic spots are connected with the village plank roads, which forms a vivid "oil painting". Since 2019, local people here have been rejuvenating the core attraction of rural tourism and activating the rural revitalization capacity, on the basis of their diverse and unique resource endowments such as snow-capped mountains, glaciers, grasslands, forests and canyons. More and more tourism projects have increased the vitality and ethereal charm of empty valleys and grasslands, and successfully built the village into the Internet celebrity brands of “Returning to Nature at Ta Village” and “the First Village in the South of Xinjiang” for rural tourism.

Talat Village is located in Keketuohai Town, Fuyun County, Altay Prefecture, Xinjiang Uygur Autonomous Region, China. It is an agricultural and animal husbandry village occupied mainly by Kazakh ethnic group, which is rich in natural ecosystems, prominent in landscape features, profound in folk culture, and well-known as the “First Village along the Erqisi River”. In August 2016, Talat Village was identified as the demonstration village for “A Dominant Product or Industry for One Village" by the Ministry of Agriculture of China, and as a characteristic village by the Ethnic Affairs Commission of Xinjiang Uygur Autonomous Region. With the creation of AAA scenic spots as the starting point, local villagers have further improved the infrastructure such as roads, tourist service centers, public toilets, parking lots, guide signs and cottages, in order to promote the adjustment of rural industrial structure centering on tourism.