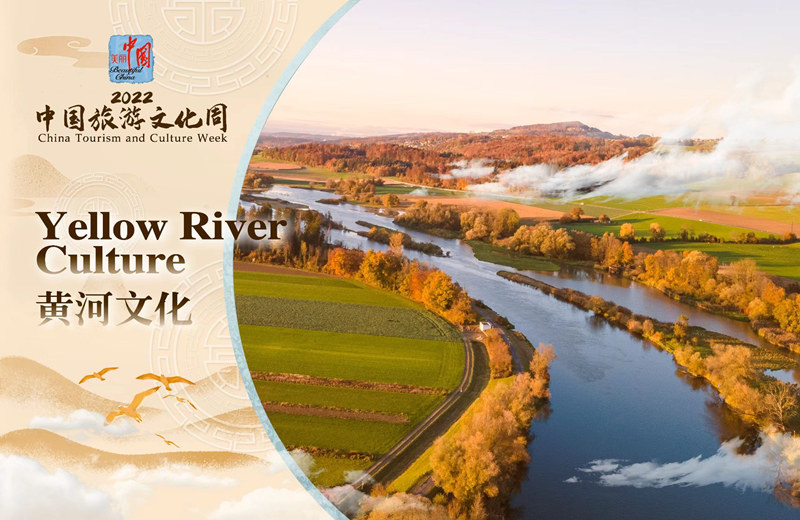 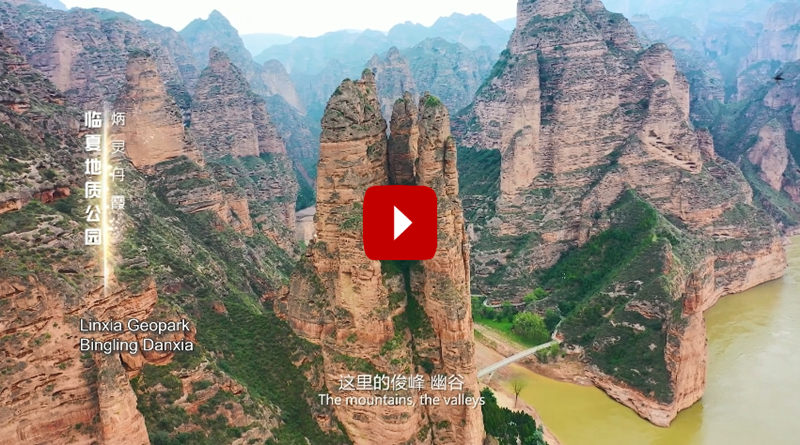 In the upper reaches of the Yellow River where the Loess Plateau is intersected with Qinghai-Tibet Plateau, there is an ancient and magical land - Linxia Geopark. Located in Linxia Prefecture, Gansu Province, Linxia Geopark is a comprehensive geopark without enclosures, an embodiment of local characteristics of minority cultures, and a combination of geology, ecology and culture. It is characterized by Cretaceous dinosaur footprints and Late Cenozoic paleofauna, and highlighted by Late Cenozoic strata, northern Danxia landform and the landscape of the Three Gorges of the Yellow River. The park is also abundant in ancient animal fossils, among which the fossils of six species, namely hezhengia, hipparion, platybelodon, coelodonta antiquitatis, equus eisenmannae and dinocrocuta gigantea rank first in the world! There are the world-renowned world cultural heritage - Bingling Temple Grottoes, the unique Bingling Danxia landscape, and the colorful pottery that has been lying there for thousands of years. 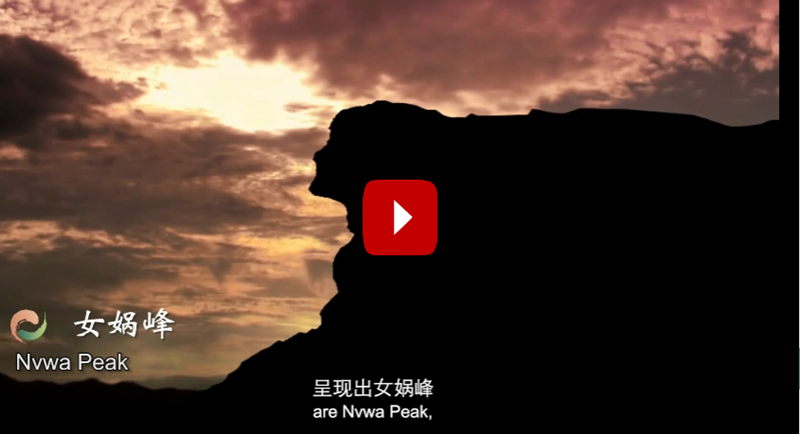 Starting from the Tibetan Plateau, the Yellow River forges all the way forward and twists at the Qinjin Canyon Yanchuan section, forming five continuous S-shaped bends, like a dragon rolling ahead, which is the well-known geological wonder of the world - the Yellow River Meanders. Among them, Qiankun Bend is the most majestic and spectacular. It has a curvature of 320 degrees, shaped like a Taiji symbol, and is known as the First Bend of the Yellow River. The Yellow River Qiankun Bend Scenic Area, lying in the town of Qiankun Bend, Yanchuan County, Shaanxi Province and covering an area of 27.4 square kilometers, is the core of the Yellow River Meander National Geopark. The scenic area is distinctively characterized and has various types of tourism resources, including Qiankun Bend, Qingshui Bend, Huifeng Village, and Mao Zedong's Former Residence in Liujiashan at the Yellow River Valley. Besides, the ancient Nianpan Village and other resources that have preserved integrated monomer structure, are perfect for appreciation, recreation and use, and also have unique historical, cultural, scientific and artistic value! 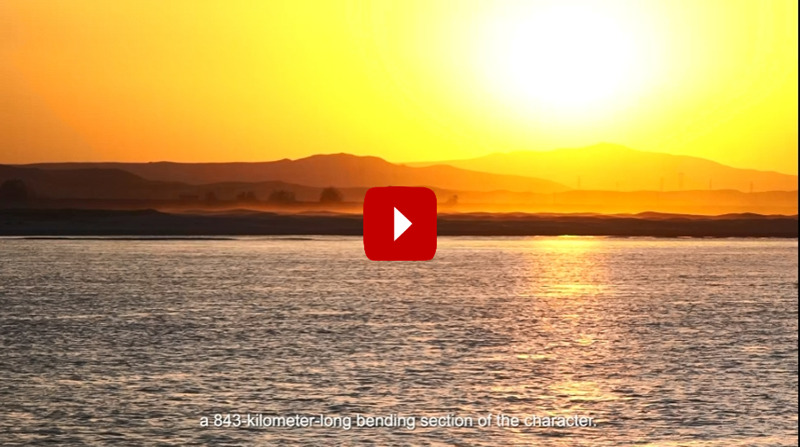 Where the Yellow River Flows

The Yellow River, the Mother River of the Chinese nation, stretches for 5,464 kilometers across the wonderful land of China. The turn meandering for 843 kilometers and shaped like the Chinese character “几” in the northernmost Inner Mongolia is one of the most obvious geographical indications in the Yellow River Basin. It flows quietly and peacefully across the vast Hetao Plain, nourishing thousands of miles of fertile soil which is dotted and inlaid with some lakes such as Wuliangsuhai Lake, Daihai Lake and Wuhai Lake. The flocks and herds and horses are scattered on the Ordos grasslands, and the highest sand hill in the world stands in the Badain Jaran Desert. Here mountains, rivers, forests, farmland, lakes, grassland and desert coexist harmoniously, and the nomadic culture and the farming culture are integrated peacefully. The Yellow River flows here, contributing to a plenteous harvest of crops and the thriving animal husbandry as well as the happiness of local people.

Luoyang by the Yellow River

Luoyang is an important hub in the middle and lower reaches of the Yellow River which runs across the city for 97 kilometers, specifically seven towns in Xin'an County, Mengjin District and Yanshi District. The Yellow River flowing for hundreds of millions of years gave birth to the root and soul of the Chinese nation. The Heluo culture centered on Luoyang and represented by the Hetuluoshu is regarded as an important part of the Yellow River culture and known as the source of Chinese civilization. Thirteen dynasties successively established their capitals in Luoyang in Chinese history, so it is the earliest and longest capital established by the most dynasties in China. The world wonder is that the ruins of the capitals of Xia, Shang, Zhou, Han and Wei, and Sui and Tang dynasties coexist in Luoyang. We can know about China through the Yellow River and the Chinese civilization through the Heluo culture. Now Luoyang reflects not only the majesty and grandeur of the ancient Chinese capital but also the vitality of a modern city. 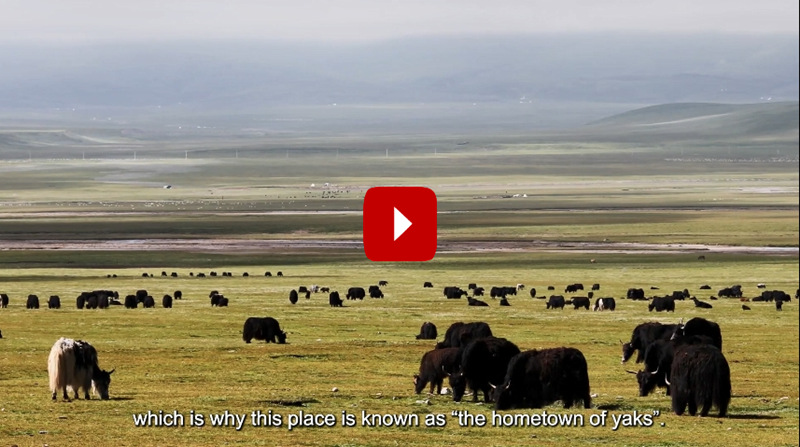 The Pure Land at the Source of the Yellow River 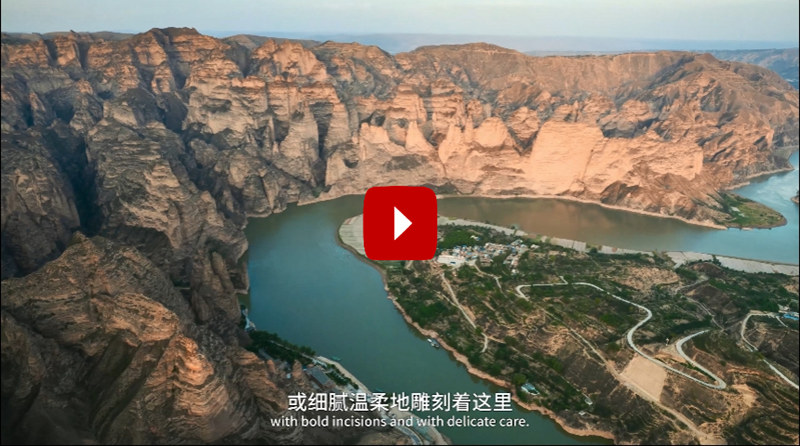 Where Yellow River pours down from heaven

The first stop that receives the Yellow River on the Loess Plateau is Linxia Hui Autonomous Prefecture in Gansu Province. Linxia covers a total area of 8,169 square kilometers, accounting for only 1.92% of the total area of Gansu, but is bestowed with a wealth of widely different landscapes. Standing at the junction of two steps, Linxia appears as a sloping basin in the whole, with the drop in elevation of nearly 3,000 meters, and is dotted by 163 large mountain ranges and 10,823 large or small valleys. It is unconstrained as the northwestern land, picturesque as the ranges of Qinling Mountains, and precipitous as the edge of Qinghai-Tibet. This is an ancient land where dinosaurs ever lived and multiplied, and where breathtaking cultural relics are well preserved. For thousands of years, this land remained a witness to the mingling and collision of multiple cultures. 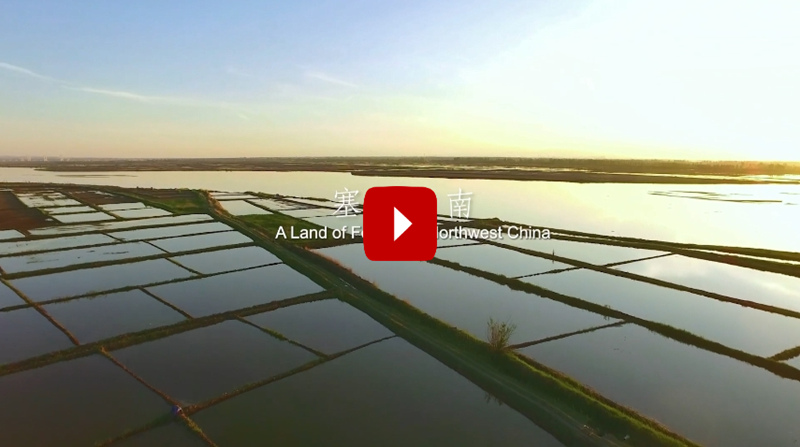 A Land of Fertility in Northwest China 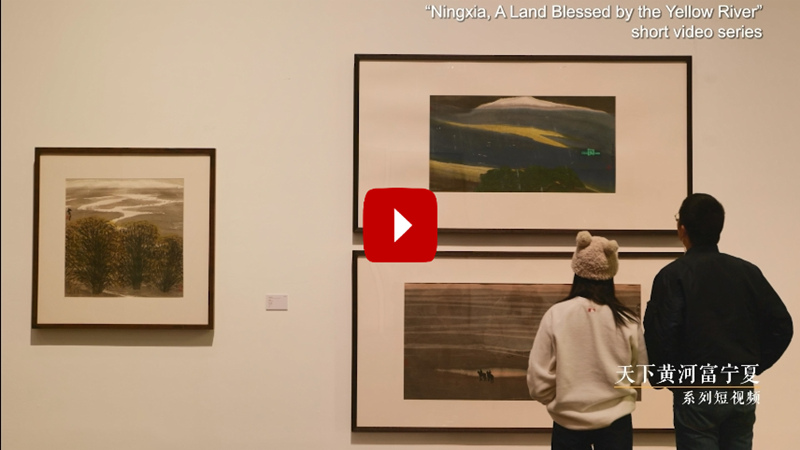 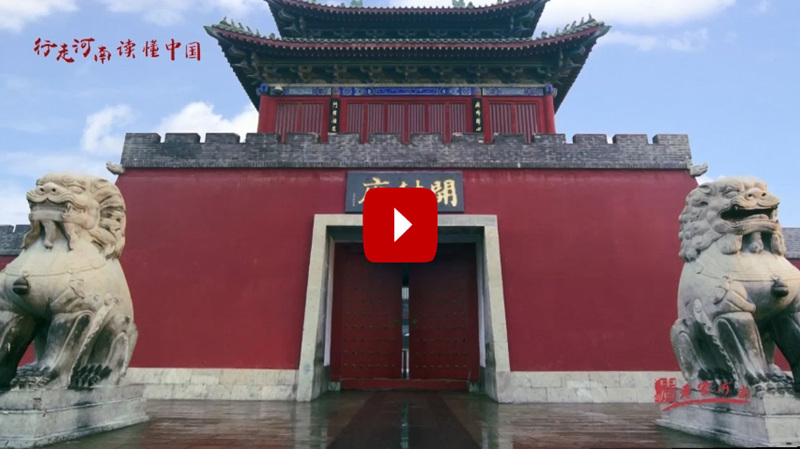 The He'nan Section of Yellow River

There are extremely abundant cultural resources of the Yellow River in Henan Province. The Yellow River flows across eight cities in Henan, namely Sanmenxia, Luoyang, Jiyuan, Jiaozuo, Zhengzhou, Xinxiang, Kaifeng and Puyang  and stretches for 711 kilometers. In addition, the Yellow River ran through Xinxiang and Shangqiu previously. Henan is also regarded as the birthplace of Chinese civilization. There are a total of five world cultural heritage sites, namely the Longmen Grottoes in Luoyang, the Yin Ruins in Anyang, the "Heaven and Earth" historical building complex in Dengfeng, the Henan section of the Silk Road, and the Henan section of the Grand Canal. The splendid historical civilization in Henan is clearly identified and will be permanently preserved forever in the incomprehensible oracle bone inscriptions, on the rusted bronze tripods, in the ruins of the broken walls and on the celadon of the broken dining utensils.

Shanxi is a place of treasures with five thousand years of civilization. Passed through by the Yellow River, it nourishes the people with Hukou Falls and Laoniu Bay. Yanmen Pass Great Wall lying between the mountains and rivers; the magnificent Taihang Mountain converging the believes of people; Yungang Grottoes blending Eastern charm and Western aesthetic; Pingyao Ancient City as China's Wall Street displaying the wisdom of the Jin merchants 2700 years ago; and Shanxi food carrying distant memories. Touring in Shanxi is to read the history of changes in the Yellow River culture. Shanxi is a miniature of ancient Chinese civilization, preserving its ever-lasting elegance in every part. 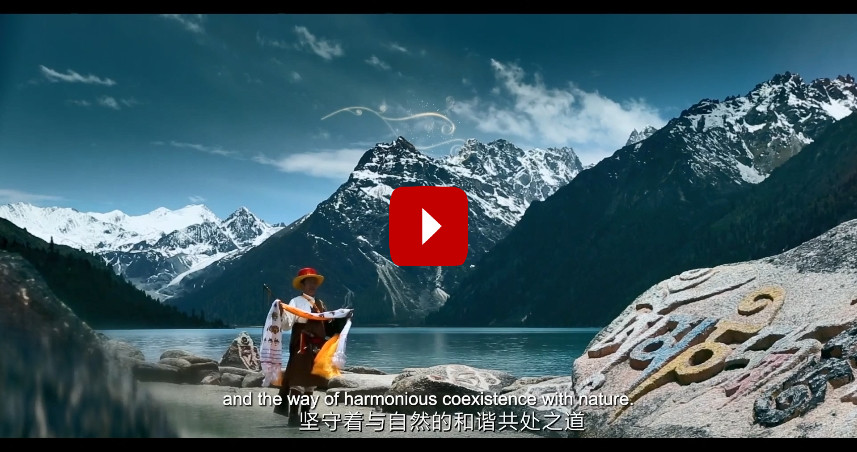 Sichuan, a place of songs and poems along the Yellow River

Sichuan Province is an important water source conservation area in the upper reaches of the Yellow River which runs from west to east through five counties, that is, Zoige County, Ngawa County affiliated to Ngawa Tibetan and Qiang Autonomous Prefecture, Songpan County, Hongyuan County, and Shiqu County. There are ninety-nine bays alongside the Yellow River, the first one of which merges with the Bai River in Tangke Town, Zoige County, Sichuan, and makes a 180-degree "S-shaped" turn in the Zoige Grassland. Here the clear water flows slowly through the vast grassland on which the cattle and sheep stroll leisurely. It is the Yellow River that gave birth to a splendid Chinese culture. From the legendary Ancient Road from Shaanxi to Lhasa to the Cultural Corridor in Western Sichuan, the land here has been nourished slowly by the Yellow River for thousands of years to lay a foundation for the Chinese culture. 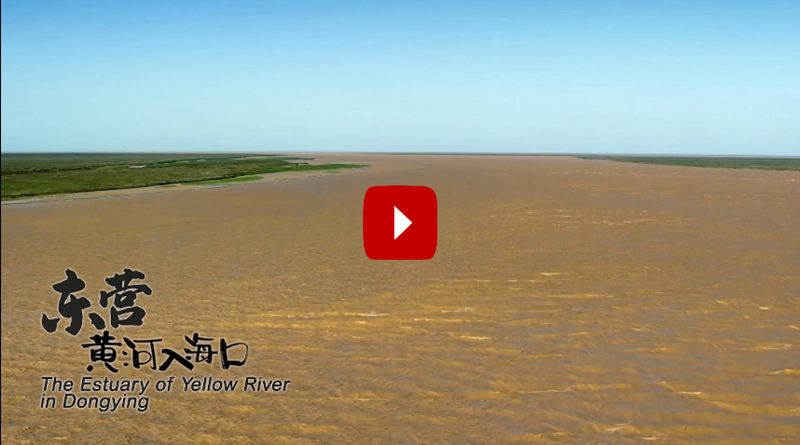 The Boundless Beauty of Yellow River

As the main birthplace of Chinese culture, the Yellow River runs across nine provinces and regions in China, with a total length of 5,464 kilometers, including 628 kilometers in Shandong Province which account for three-quarters of its lower reaches. It not only brings water and sediment from the middle and upper reaches to Shandong in the lower reaches, but also deposits the wisdom and cultural connotations of the middle and upper reaches in Shandong, making Shandong rich in ecological and cultural resources in the Yellow River Basin. The long history and unique humanities have deepened the connotations of the rich and colorful cultural tourism resources along the Yellow River in Shandong. The "Confucian culture", "Water Margin culture", "Canal culture" and "Spring culture" have their own special charm. The Yellow River flows into the sea in Dongying, Shandong.