The District of Tongnan is located in a picturesque corner of the Twin City Economic Circle, geographically connected and culturally integrated between Chongqing and Sichuan. The eye-catching scenery, heart-warming atmosphere, and ecology combine to offer the locally renowned six sources of health and happiness. 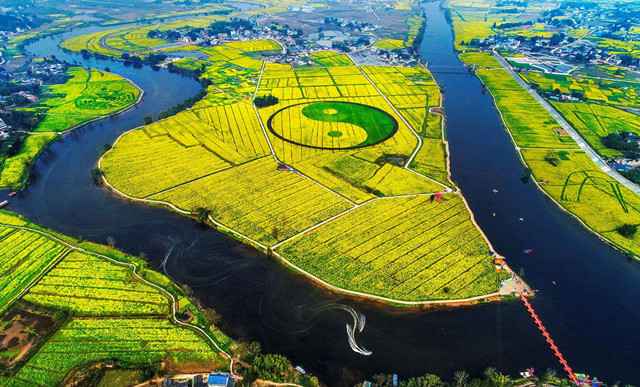 The yin-yang symbol in the golden rapeseed fields of Tongnan.

Comrade Yang Angong may have lived a brief 29 years, but during that time, he epitomized an indomitable spirit of resistance and unyielding bravery. His unshaken conviction underlined his status as a glorious revolutionary.

When a visitor steps inside the Home of Yang Angong Scenic Area, one can almost hear the inspiring yells of unyielding conviction above all else.

Along the quiet bluestone paths of Shuangjiang Ancient Town, you stroll past numerous walled courtyards and mossy wells full of story, which instill the deep sense of walking back in time. Shuangjiang is among the first batch of ten famous historically and culturally significant towns. 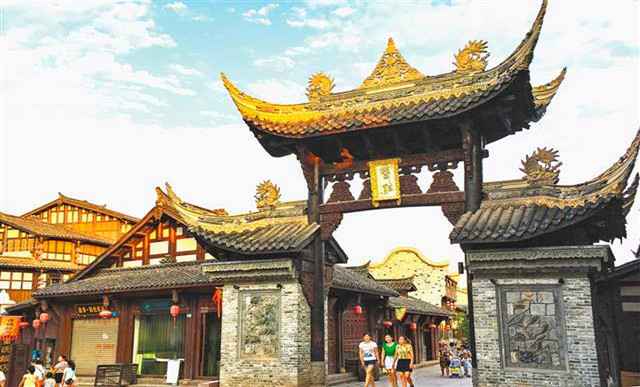 Construction began over the Ming and Qing dynasties, and the site features over twenty buildings of ancient charm, including the large courtyards of Qingtaihe, Xinglongjie, Changtanzi, and that of the dynasty era post office.

The distinctive and well-preserved Yang Family Residence dating from the Qing Dynasty was designated a national treasure by the architect Liang Sicheng.

Strolling through small streets and narrow alleys in the ancient town, the field of vision is met with stone steps, old blue-tiled houses, and traditional Qing Dynasty markets that instantly whisk you back into the past. 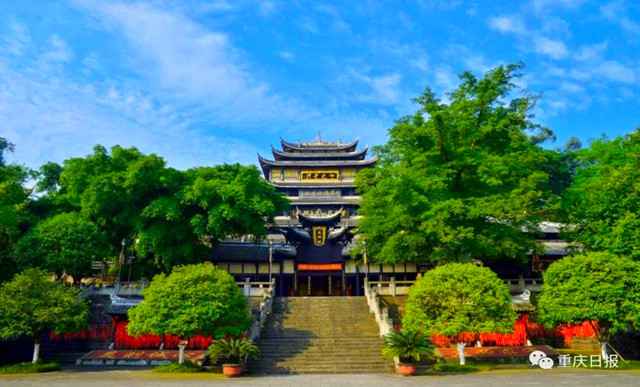 In 1843, Zeng Guofan’s couplet inscribed for the Great Buddha Temple is still on view in the main compound. It is on the banks of the Fujiang River by Dingming Mountain. There are 928 Confucian, Buddhist and Taoist statues in 126 shrines dating originally from the Sui Dynasty 1400 years ago, and which later flourished through the Tang and Song Dynasties, and continuing to this day through the Ming, Qing, and Republic of China eras.

Inside the Great Buddha Pavilion, the gilded Buddha Shakyamuni sits barefoot and rises to a height of 18.43 meters. Carving work began in the Tang Dynasty and continued through the Song Dynasty when the body was chiseled out. After five coats of gold, he became known as the ‘Crown of all golden Buddha statues.’

There are also 18 further attractions, such as the ancient Seven-Eaves Buddha Pavilion with a fully glazed roof, the echo wall, and the cliff stone inscriptions of the Dingtian Buddha, Haichaoyin and CuipingQiuyue. The extraordinary craftsmanship embodies people’s wisdom and diligence. 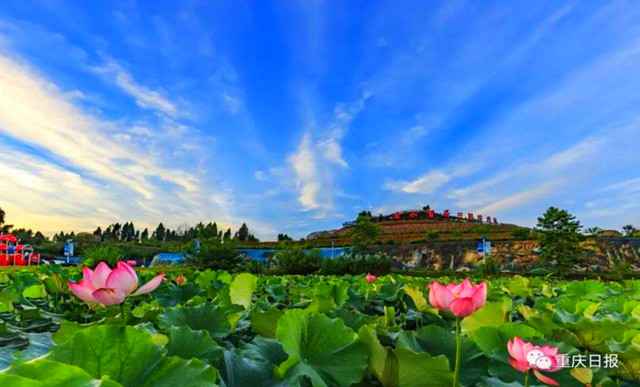 Outside the north gate, there is Dafo Temple Wetland Park and a 1,650-acre vegetable plantation. The Fu River Wetland Park gradually unfolds before the beholder, making visitors feel close to nature.

Walking along the Fu River, you can watch the flight of waterfowl and listen to the sounds of water, as the bustle of city life falls to the wayside. Sailing on the river, there are green mountains and tall buildings, either side that reflects faintly across the surface. Vegetable plantations line the scenery and exhibit a view full of greenery, like a ten-mile long natural art gallery.

The sweet poeticism of pastoral life

Vast seas of flowers and streams adorn the villages and surrounding lands like a scenic painting, welcome to the beautiful hometown of Chen Tuan. Every March, the magnificent fields of rape blossoms announce the arrival of spring and unfold towards the horizon like a carpet of gold.

The 236-meter-diameter yin-yang pattern cut into the fields of rape, wheat, and other crops, symbolizes the depth in wisdom in these lands. Among the sea of rapeseed flowers, you can stroll, go boating, and even take to the air upon a helicopter and watch the billowing waves of the crop.

In the Tai’an Leisure Agricultural Tourism Resort, the glass structure containing the Vegetable Expo Garden stretches over 10,000 square meters. The charming and bright fairy tale surroundings display more than a thousand varieties of fruits and vegetables, and where the luxuriant trees stand tall as they glisten like jade. 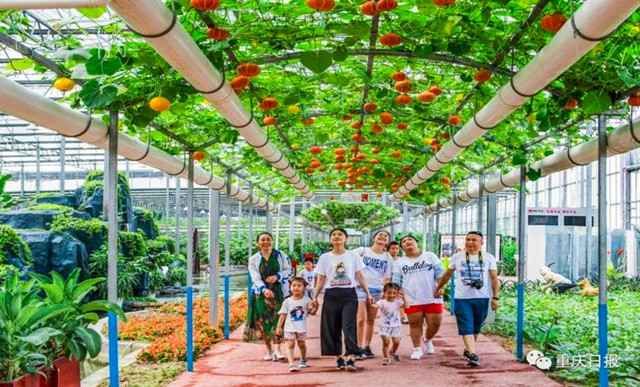 The Fragrant Lotus Park is another world of experience integrating modern agriculture, leisure tourism, and parent-child interaction. On either side of the cherry blossom-lined avenues, lotus leaves reach for the skies and catch the sunlight, while corridors are woven of green bamboo, and the scents of pastoral life seep through the inner depths of the soul.

In Tongnan, there are pastoral gardens everywhere one looks, the aroma of flowers permeates the four seasons, and colorful festive activities are held throughout the year on the themes of flowers, water, pastures, and nostalgia.

Tongnan is the food and lemon capital of western China. There are not only fresh vegetables and fruits, but also 18 special delicacies, as well as a series of beauty and health products based on lemon, roses, and mulberries. Green ecology and quality life nourish both inner health and outward appearance.

Tongnan lies within a geographical basin of shallow hills bestowed with fine ecology, fertile lands, and unique agricultural conditions. The five ‘Golden flowers’ of agricultural production are vegetables, lemons, rapeseed, Chinese pepper, and crayfish. The wise people of Tongnan have used these natural ingredients in their delicious culinary specialties. 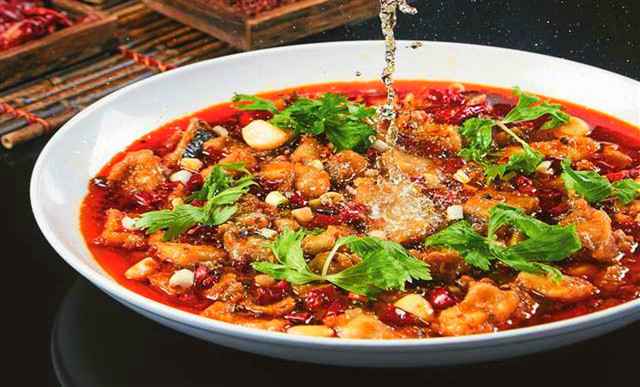 The specialty of Tai’an fish.

These culinary delights include Tai’an fish, vegetable banquets, fried chicken or duck, crispy white fish, chopped dishes, Shuangjiang jelly, lemon tofu, and Yuxi pancake, just to name a few. Whichever you choose to enjoy, spicy and fragrant dishes will cover the table one after another.

Tai’an fish is the most famous local cuisine in Tongnan. It was created by residents along the Qiongjiang River in Tai’an Town in the 1970s, thanks to the abundant silver carp. The dish has been listed among the intangible cultural heritage of Chongqing. Spice, freshness, and fragrance are the essential qualities of Tai’an fish. Put a piece of the fish in your mouth, and the tantalizing flavors will be impossible to resist. 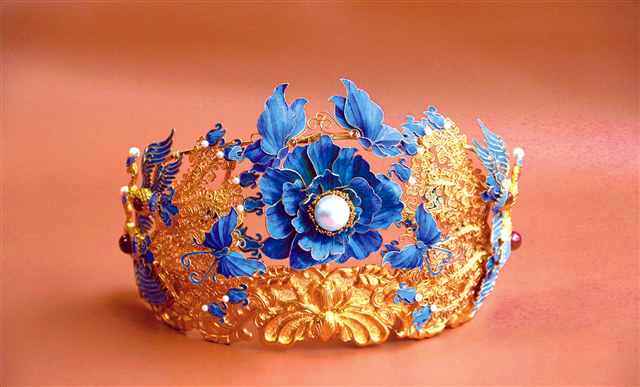 Art on the fingertips

Shuangjiang filigree is a traditional handicraft of long heritage. These exquisite filigree inlays are beautiful in shape and were once custom-designed for imperial families. The workshops create purely hand-made items with inlaid gems and pearls, showing the elegance and charm of traditional Chinese culture. These products are recognized as intangible cultural heritage on a provincial level.

Tongnanpaper-cutting was popular in the late Qing Dynasty and the beginning of the Republic of China. Its artistic styles are diverse, with traces of variation according to southern and northern methods. In the modern creations, the scenery and folk stories of Tongnanare cut into realistic, painting quality works, enhanced with auspicious patterns to create vivid and beautiful pieces of artwork. 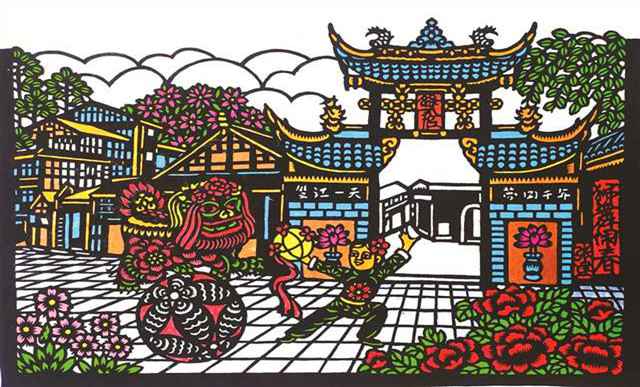 ‘Reclining Buddha’ shoes are made from bamboo and hemp using a traditional hand-weaving technique of century-old history. This product was listed as intangible cultural heritage in Chongqing in 2019. The weaving process is complex, involving the stages of cutting, steaming, pulling, cutting, tearing, and weaving, all done by hand. Since the materials are sourced locally, the shoes are environmentally friendly, inexpensive, and durable.

Tie-dye handicrafts in Tongnan make use of traditional Chinese dyeing processes. The ChongkanHuluba artworks use tie-dyeing techniques to adorn fabric with a wide variety of elegant patterns. When cotton and linen meet the true colors of plant-based dyes, the beauty of flowers is captured within the fabric. 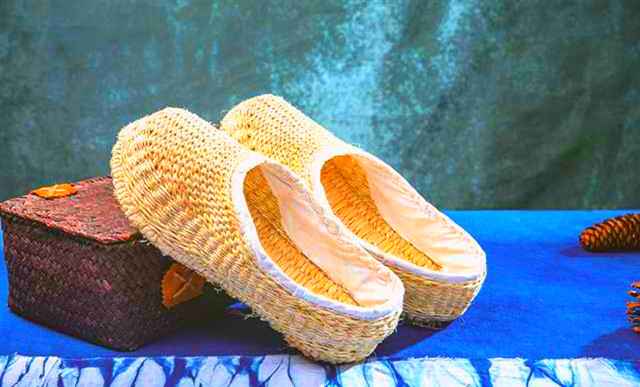 ‘Reclining Buddha’ shoes made from woven bamboo and hemp.

Tongnan canned yellow peaches retain the flavor and nutrition of fresh peaches, with fine texture, pulp, aroma, and exuding a bright luster. Experts have praised them as a rich natural endowment, while the Ministry of Foreign Trade of the People’s Republic of China issued the product an honorary certificate of quality. They have been qualified for export inspection waivers by Shanghai Port, and have won the gold medal at the first National Food Expo.

Lemons are grown in Tongnan rank first in terms of plantation area and agricultural output for lemon related products. They have passed GAP certification to meet international standards, and are included on the national protection list for product origins. 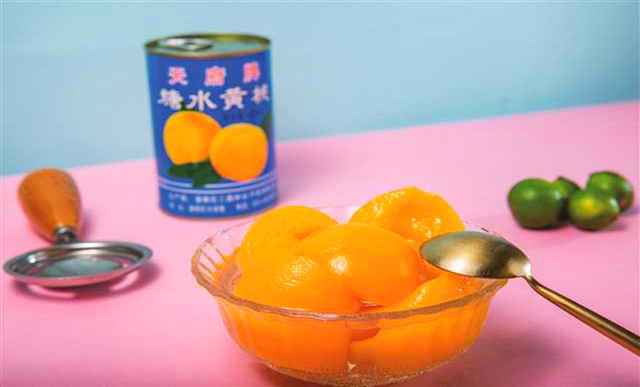 Major product series include green food and products for beauty, skincare, biomedicine, and health. These have been developed and exported to more than 40 countries and regions, including Germany and Russia, along the Belt and Road freight railway.

Lemons may have a sour taste, but they have brought sweet times to 50,000 farmers in Tongnan who have risen out of poverty as a result. 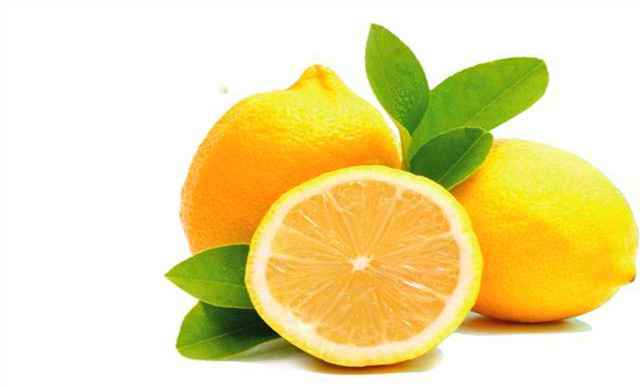